I said I'd show you the shelves Nick built, and I believe I promised a house tour of sorts, so why don't we start with the mudroom? I realize it's a little unconventional to start a bloggy house tour in the mudroom, but don't you think you'd be the kind of friend who would come into our house through garage like family rather than all formal-like through the front door? I do.

Anyway, If we're going with the premise that this is the sort of blog that does house tours, I think we ought to start with some "before" shots. These were taken back in March, when we were first under contract on the house. See tiny Gwen in her car seat?

I loved the idea of having a mudroom before we moved in, because the front door to our previous home opened straight into the living room, and we had battled the clutter of coats, shoes, bags and mail before. Having a separate room (with a door!) to shed all of that stuff before entering the rest of the house was extremely appealing. However, we could tell from the very start that our mudroom would need some work before it could be fully functional. There were already some shelves and the idea of cubbies in place, but not in a way that would be very useful to a family of four and their stuff. There weren't even any hooks in the cubbies, so we ended up just dumping our jackets and whatever we had in our hands on the way in from the garage on whatever flat surface we could find. And before too long, it looked like this:


So I rolled up my sleeves and found a home for most of the stuff and got some storage baskets for the shelves and the top, and things were greatly improved. But the cubbies sadly remained a bit useless. Then our TV-free week rolled around, and on the very first day Nick came home with a load of lumber, and set about building a shelf at the top of each cubby. And in a few evenings of work, this is what he came up with!

He's pretty clever, right? Now we each have a cubby with three double hooks and a shelf and a basket for hats, gloves and whatnot above. We also added five bigger storage bins above for outdoor toys, sports equipment and other stuff we want on hand, but don't need to access every day. I also like that bin add some color and interest to an otherwise plain and small room. I plan to personalize each of storage basket with a tag or something with everyone's initial. Maybe like this or this? 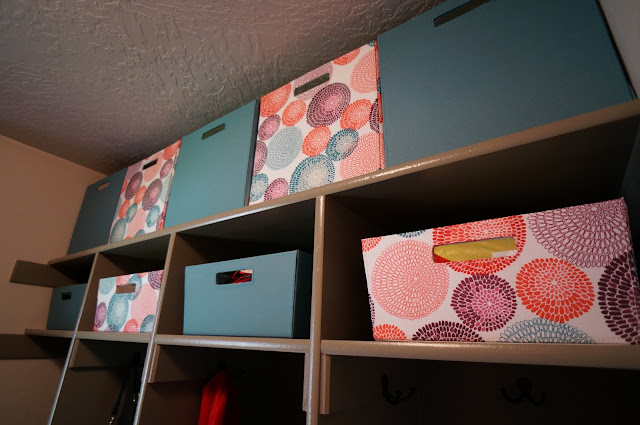 In the above photo you can glimpse the other two things we've added to the room: there's a mirror for checking your teeth on the way out the door on the right, and a mail and key organizer on the left. You can also see it reflected in the mirror, reminding me that I need to look through the incoming mail. That thing has been such a life saver on the clutter front! I'm also planning to add a cheerful print next to the door, maybe this one?

Anyway, that's our mudroom! I'll do more rooms as we go and as they are presentable enough to invite the world into. Not that you would judge me, because that's just not you, is it?

UPDATE: A few of you have asked, so let me tell you: The bins and baskets were from Target, although I can't find them online, and the mail and key organizer is this one from Amazon.
Posted by Tamsin North at 3:04 PM