How we're sleeping and a few goings on

So we are about 2/3 of the way through May, and therefore 2/3 of the way through our monthly challenge of going to bed early. Friends, we are failing miserably! We were doing fine for the first week or so, then one night we switched off the TV at 11, then proceeded to shop online for lamps until midnight. Great success on the lamp front, but then everything just sort of derailed from there. The thing is that we just don't like having an earlier bedtime. It makes us grumpy. We just don't have time to do the things we had planned for the evening, and that creates stress, which seems unnecessary before bed. So for now I'm torn between calling the whole thing a fiasco and giving into the fact that we are just night owls by nature, or doubling our efforts to get this whole challenge back on track before the month is up. We'll see!


What else have we been up to? Well, Espen "graduated" from Joy School, and it was the cutest little event ever. My favorite part (besides the singing, which was hilariously cute) was when each little graduate received their diploma and then slid down the slide into the future. Definitely a preschooler favorite!
I also loved their graduation caps. If you look closely, you'll see that they're made of  styrofoam bowls, card and yarn! Miss Stepper is, without a doubt, a creative genius, and we are so very lucky to have her for Espen's very first teacher. And I can't believe Espen has completed a school year already!!!

Last Saturday was May 17th, which is Norway's national holiday, and so we headed up to Salt Lake for the annual celebration. While not exactly a carbon-copy of what you might see if you were actually in Norway for May 17th, it captures the flavor and gives us a chance to eat Norwegian food and to dress our kids up in their national costumes.

Gwen had outgrown her bunad (national costume) from last year, so my mum very obligingly knitted her a new one. Isn't it adorable? It actually has a little knitted white top to go under the dress, but I just didn't have the heart to make Gwen wear it in 80 degree weather, so put her in a white cotton onesie instead. She's a bit pink cheeked, but was a total trooper. Fun fact: my mum used the same pattern to knit me the same bunad over 30 year ago. You don't happen to have a picture handy, do you Mummy? 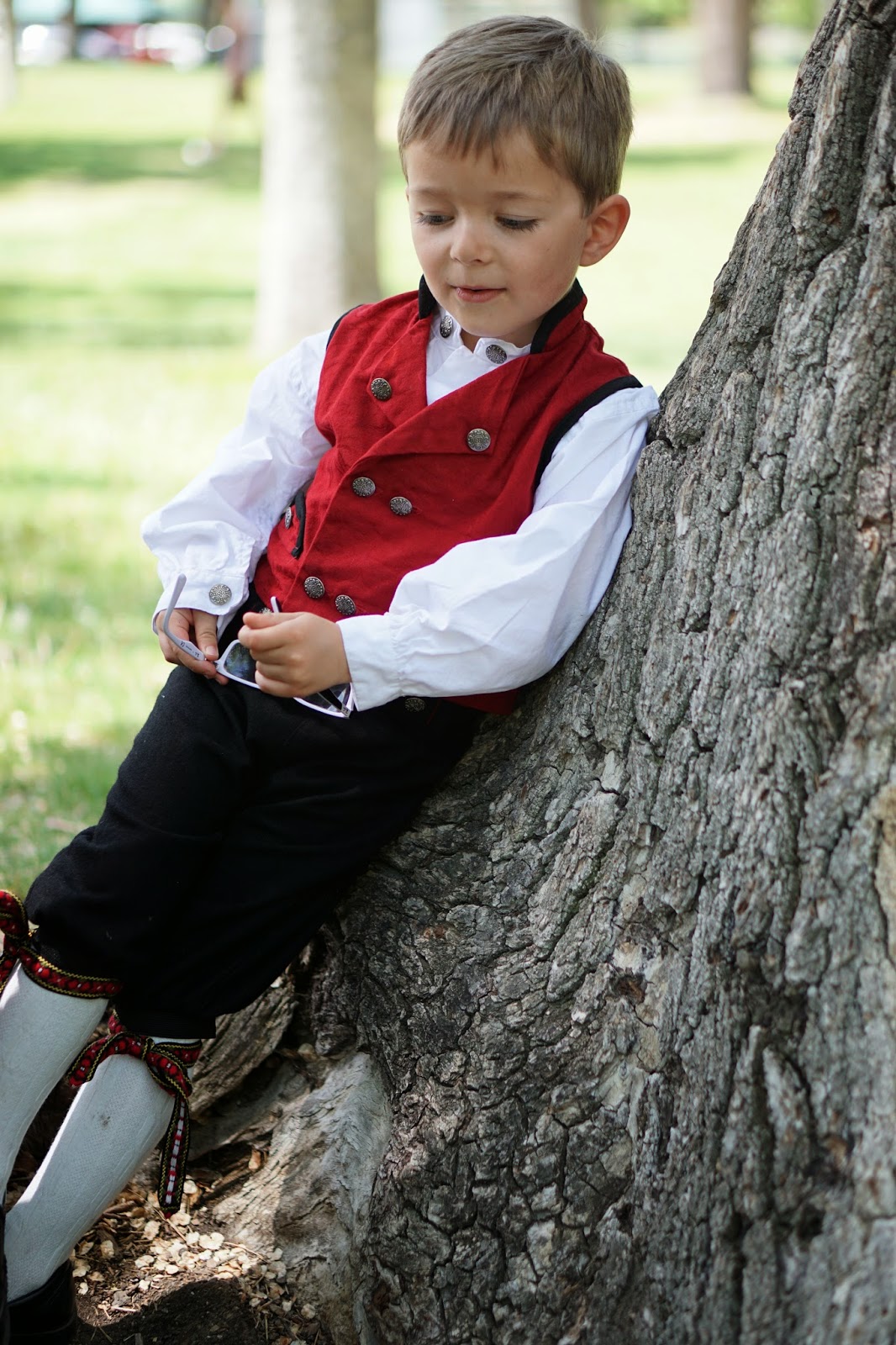 We bought Espen's bunad when we were in Norway last year, and I think, if we're lucky, that we can maybe squeeze a third year out of it next year. They don't wear them very much (once or twice a year), so it's nice to get our money's worth. Isn't he handsome, though?!? I love a man in knee socks.

And in other news, we've booked our plane tickets to Norway! We leave July 2nd and get back on the 25th, which means that not only do we get just over three weeks in Norway, I also get to spend my birthday there with my family, which hasn't happened for 10 years. Very excited! I've been hungry for some Norwegian summer, so here's crossing everything we have for three weeks of glorious sunshine, firing up the grill, eating strawberries and swimming at the lake, and hopefully not three solid weeks of rain, which is probably much more likely, if what I see people posting on Facebook is anything to go by. Run on sentence!

And that's how we're doing! How about you?

Email ThisBlogThis!Share to TwitterShare to FacebookShare to Pinterest
Labels: bedtime, health, May, sleep