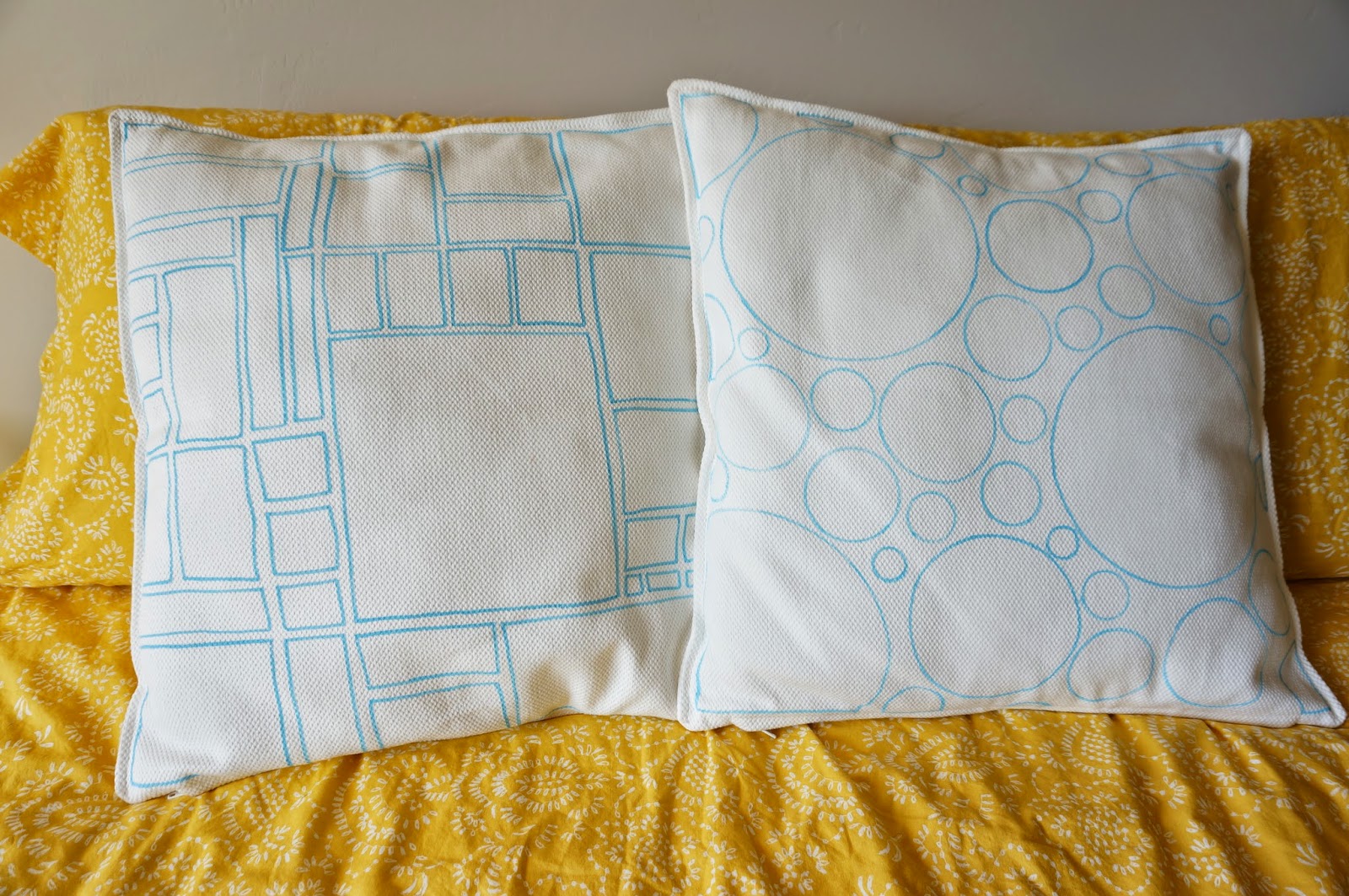 Some of you may have already seen my photos of this project on Instagram, but I thought I'd take a few photos with my actual camera and put together a quick post about the (super simple!) process involved.

Here's the scoop: We had a pair of plain white pillow cases (or cushion covers, if you will) that I once bought in a passion for the all things clean and minimal. Then we later realized that we were neither a clean nor a minimal sort of family, and the white pillows were relegated to the guest room. Where they certainly served their purpose, but didn't exactly magnify their calling in life.

Enter my Mother's Day present from Nick, the Young House Love book (check out their very cool blog here!), full of ideas for for relatively quick and easy home decor projects. Including one that suggested drawing on a pillow case with fabric markers. And pictured was the exact cheapy white IKEA pillow case that we had. So I bought a fabric marker in a similar blue to the one in our guest room, put the kids to bed and plopped the pillows down on the kitchen table.

When it came right down to putting pen to pillow, I was nervous, so I made Nick do it. Which is the solution to many things in our marriage! At my request, he came up with a pretty cool pattern of squares and rectangles, similar to the one pictured in the book. He just freehanded it, which I think turned out better than futzing around with rulers. The only trick is to keep the space between the squares and rectangles pretty even on all sides to keep the whole thing looking cohesive and intentional. I loved it! And it didn't look too terribly hard, so when the first one was finished, I decided to give the second one a try.


To compliment and contrast the squares on the first pillow, we decided to do circles on the second one. So we rounded up (ha!) a variety of different sized circular things from the kitchen, and just had at it. We tried to space things pretty randomly, while still keeping the circles a fairly even distance apart and filling the empty spaces as much as possible.


As you can see, the lines aren't completely perfect or even when you take a closer look, but I honestly think that just adds to the casual, playful look. Because these pillows really aren't trying to look like they were anything but handmade. And they definitely add a fun, personal touch to the guest room, don't you think?


If you want to make your own, you will need: