One of the first things that people want to know about our trip, is how our flights went. Which, with 16 hours of travel and a 15-month old in tow, is reasonable thing to ask. It's a pretty well documented fact that toddlers don't do well with sitting still in confined spaces for hours (and hours), and we've all been on flights with screaming babies and small children. 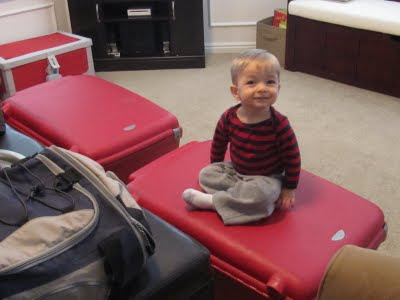 All packed up and ready to go!
So, how did Espen do? I'm going to have to say surprising well. Our first flight was three hours to Chicago, and Espen had a great time. It was all new and exciting with lots to see and explore. He enjoyed saying hi to people and looking out of the window and eating snacks. And when we brought out the beloved iPad to watch cartoons, well, his little happiness was just complete. 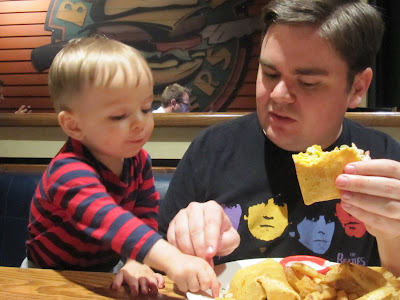 Layover in Chicago. Turns out that Espen is quite the french fry enthusiast.
Then he continued to do fantastically all through the Chicago airport, even though it was hours past his bedtime, and he had to be exhausted. He introduced himself to everyone in sight, and at one point attempted to head off on a solo adventure of the airport. While we were there, we made a point to sit down and eat a real dinner, rather than rely on the airline to feed us. Nick and I often did this when it was just the two of us because I don't like airline food, but it also turned out to be a really great thing to do with Espen too. We sat in a booth, which gave him some room to roam (and chat to people at surrounding tables!) and Nick and I a bit of a break from wrestling him. Toddler travel tip: Because we knew meal times would get a bit weird, we brought some oatmeal that we just needed to add hot water to. At the restaurant, we just had to ask the waitress for some hot water, and then Espen's dinner was served - with a hearty side of fries from Daddy's plate. It was great to get onto an 8-hour flight, knowing that Espen had a full tummy and didn't have to rely on whatever the airline served up. 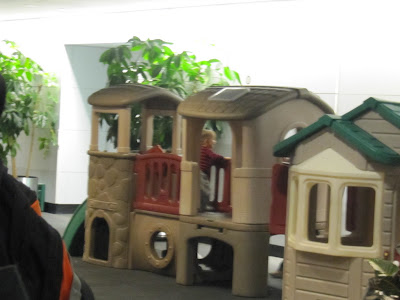 Awful photo, but yay for airports with play areas! Great to get the wiggles out between flights.
Another thing I can't say enough good things about is play areas in airports. If you are traveling with children and have time, definitely stop for a quick play between flights. When you're asking your child to make the sacrifice of traveling for you, then the least you can do is sneak in some fun for them along the way. This photo was taken while Nick was standing in the long line to board our flight. Espen and I only got in about five minutes of playing, but it was a happy five minutes that we didn't have to stand in line with a tired, wiggly baby. 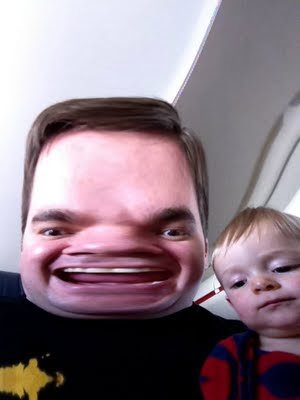 Playing with Photobooth on the iPad. Bless that iPad!
We kept Espen happy and busy on the long flights with books, a few toys, snacks and mostly the iPad. Generally speaking, I don't think that hours and hours of cartoons are the way to go for any kid. But travel is a lot to ask of a little body like that, so I think that you may as well keep them happy, even if it is vegging with cartoons, games and snacks. It certainly worked for us, and I'm not entirely sure how we would have made it work without hours on Curious George and Charlie and Lola on tap.
Of course, we had our rough moments. When he gets tired and upset, Espen can scream. And scream he did. The first time we were trying to juggle three trays of food and a purple-faced, screaming Espen between two seats and it was hard. I almost cried too. But I knew he was mostly just exhausted, so I held him and rocked him and sang to him, and within two minutes, Espen was fast asleep in my lap, where he stayed for the next two hours. Then he woke up again (along with everyone sitting close to us) and screamed inconsolably for what felt like hours, but was in reality about five minutes. We finally calmed him down by distracting him with a few episodes of Curious George, and then he fell asleep again and stayed asleep for essentially the rest of the flight, waking up with just enough time to eat a bit before landing. Then, for our third flight, he fell asleep in my arms during take off and didn't wake up until it was time to get off the plane. 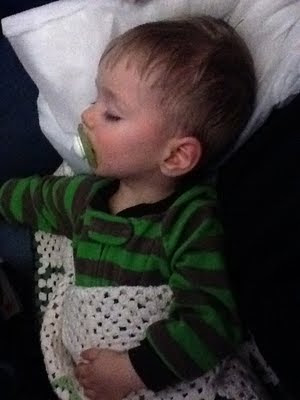 Espen finally figured out the best way to pass the time. Finally.
A few tips for night time travel. We changed Espen into his pajamas and brushed his teeth so he would know it was time for sleep. Then we read him his bed time book and gave him his favorite blanket and pacifier to help him settle down. We purposefully kept up Espen's pacifier until after this trip, because we knew that it would help him on the plane. Small children and babies can't make their ears pop, and the pressure can get extremely painful during take off and landing. Sucking, chewing or drinking all help relieve that, and so, while he has never used it a lot, the pacifier came with us. It turned out to be another absolute life saver along the way.
And that was basically the journey there. It was long, it was tiring, it was not without its challenges, but ultimately things went so much better than I was expecting. It looks like good travel-genes run in the family, and we will absolutely do this again in the future.
Posted by Tamsin North at 12:50 PM