Our ultrasound revealed two awesome things today:
We are going to have a daughter. A little daughter who, we discovered today, likes to lie with her arms above her head and her ankles crossed. Until this morning all I've really known about her is that she is most active in the afternoon and doesn't like it when the laptop rests against my belly. Now I find myself planning all of the things we're going to do together, books we'll read, things I'll teach her, and I already know that she is not getting her ears pierced until she's at least eight, thank you very much. Not my girl.

I went straight from our doctor's appointment to buy these, probably the girliest thing I've bought in years:


They were in part intended to tell Espen that he is having a baby sister (which he of course already knew), and in part just an instant celebration of this new little person who is going to turn our life upside-down.

Then I set about preparing how to tell Espen that the baby will be a little sister. While he was napping I procured a big cardboard box from a friend, and then somehow managed to shove five balloons inside and tape it shut. I feel like we should take a moment for you to appropriately marvel. OK? Moving on. Then I cut out circles from blue and pink construction paper, just to fun things up a bit. Let's be honest, this was a pretty ghe-hetto set up, but Espen is two and appreciates his mother's efforts. 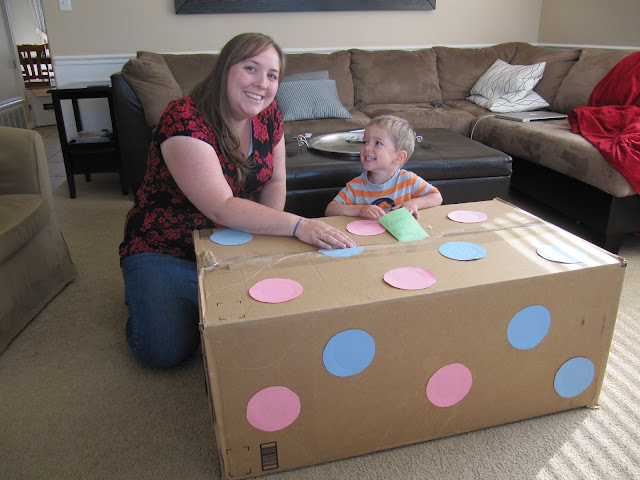 When Nick came home, we told Espen that the baby had sent him a present and brought out this enormous box for him. His response? "WHAT?!?"


Then his inner Englishman came out, and he remembered to read the card first.


We opened the box, and out flew five pink balloons, announcing that "It's a girl!"

Then the box needed to be played in, and Espen got a little crazy-eyed.


The final consensus was that this baby sister is pretty awesome. Espen is still too young, I think, to understand that colors "belong" to different genders, even if we told him that "pink means we have a girl baby!, and honestly, it's not a point I really want to push with him. He did, however, understand that the balloons were a present from his baby sister, and if there's one concept his little mind can wrap itself around, it's presents. So if he wants to think of his little sister as an awesome girl who knows how to make him happy, then I think we've come a long way.