November 15th: I am thankful for four little words 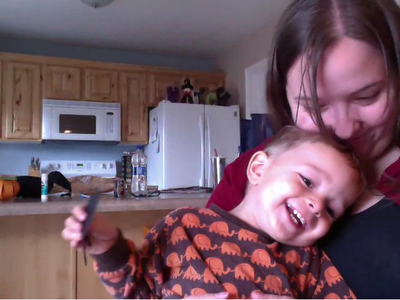 Photo taken by my mum, via Skype. She is sneaky like that.

Kids really do say the darndest things. Why, it was only this morning that I was burying my head in my hands as my 21-month old son repeated "oh shoot, oh shoot, oh shoot" over and over again. Other Espen classics have lately included "Mama, draw poopy?" and a suggestion that his Daddy should sleep outside.  The things that come out of his mouth vary from giggle-inducing, to stupefying (Did he just say...?) to outright mortifying.


And sometimes they just melt my heart:


I was putting Espen down for his nap after a very wild and raucous diaper change. He was squirmy and wiggly and I was thinking to myself that this nap is just not going to take (it still hasn't). After getting him settled in with his crazy cat, two giraffes, a hippo and a blanket, I stroked his face and told him good night. That was when Espen looked up at me said said : "Mama, I love you."


He has never said that before. Granted, he's not even two yet, so it's not too surprising, but this is also a little boy whose vocabulary includes words like "hexagon", "ambulance" and "sculpture". We tell him that we love him all the time, so it's a phrase he's heard, and as his mother, I know it's an emotion he feels. Today was just the day he decided to put the two together, and I am so grateful I was there for it. So grateful to feel the impact of having those words meant for me. So grateful to know that, together, we are doing something right.
Posted by Tamsin North at 2:37 PM