I thought I'd share this little project with you, not because it is especially lovely, but more in the hopes that someone else might find it useful. We are in the sticker phase - big time. Not simply the phase where Espen loves stickers (we've been in that phase for most of his life), but the phase where he seems to attract stickers from everywhere. The doctor's office, the grocery store, birthday parties, you name it. We initially let him stick them on the back of his bedroom door, but now he's switching rooms and I'm not especially interested in him taking this habit with him. The fact that he will happily stick stickers for a good 20 minutes has also not passed me by. Toddler gold!

So, today I made Espen a little sticker album:

I started with a blank book that had been kicking around with my crafty stuff for years. You can order them here on Amazon, or if you're in Utah valley, the BYU bookstore has a pretty good selection of different sizes. Mine had an Anne Taintor post card glued to the cover, so I needed to rip that off and cover up the evidence, so I glued on some cute paper and called it good. Espen enjoyed cutting and gluing with me, which is ultimately more important than the end result, I think.

I wanted a way to corral all of the random stickers that seem to float around our house, so I simply cut the flap off an envelop and glued it inside the back cover. It looked a little plain, so I slapped a little label on it and called it good. You, my friend, could make this completely adorable. But it's kind of ingenious, right? 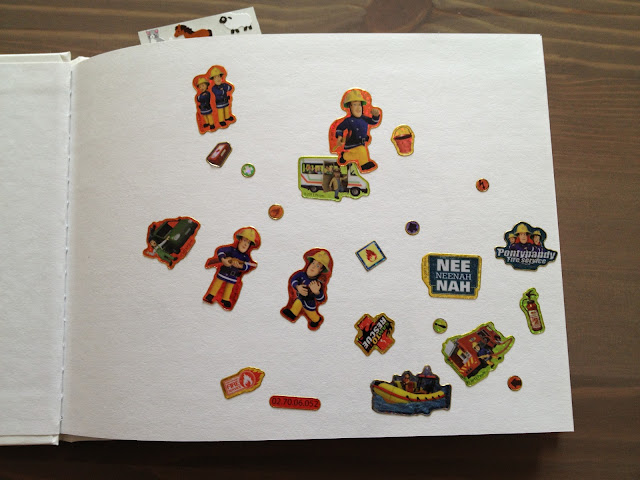 And then the pages are just left blank. It might be fun to draw landscapes or roads or whathaveyou to on some of the pages for the stickers to adorn, but we don't trouble ourselves with positioning, scale or direction in our stickering. I might try it out, though. An older kid might enjoy doing that themselves too, which, y'know... more time being occupied!


And that was that! It took about 10 minutes to put together, and would probably take half of that if you assembled your materials first, knew exactly what you were doing first, and didn't have a two year-old helping you. Espen wanted to use it right away and spent 20 happy minutes sticking all his Fireman Sam stickers in the book, along with a few random stragglers that I was happy to not have floating around the house. And the next time Espen is given more stickers, we'll know right where to put them.
Posted by Tamsin North at 10:07 PM