A little bit about the new baby

Today marks one week of back to normal, and I am finally caught up on laundry and down to one last carry-on bag to put away. We're all back on a normal sleep schedule again (thank all that is good and just in this world!) and the random bug I was lucky enough to pick up on the way home has finally left us.

I thought that now might be a good time to talk a little bit about the new baby we're expecting, and I am going to do so in Q&A format, answering a few questions that I would probably want to ask myself if I wasn't me, if you follow. So:

How far along are you? As of this morning, 16 weeks.

When is the baby due? Right around Thanksgiving. Which is the end of November.

Why did you wait so long to spill the beans? Yes and no. We told Nick's parents almost as soon as we knew ourselves, along with a few friends that we wanted to know, but then we promptly swore everyone to secrecy. We knew we were going to see my parents in Norway, and that it would be a rare opportunity to tell them in person. Somehow we managed to keep them out of the loop for about six weeks, and told my parents on the night we arrived.

How did you tell you parents, and how did they react? We brought them a CD with some family pictures we had recently taken, including this photo: 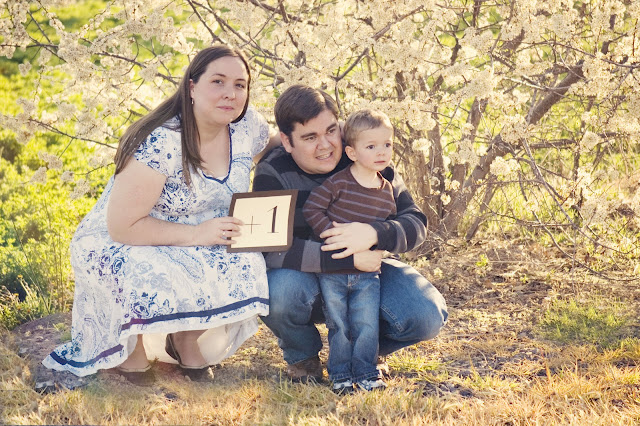 We thought we were all kinds of clever and sneaky, but after a long, busy and emotional day, my parents didn't get it at all. So it took some clues and hinting, and then they were delighted! My mum cried and my dad claimed to have known all along, and it was all exactly as it should be. Then we spent the next couple of weeks trying to talk my mum out of shopping excessively for a baby whose gender is yet to be known.

So when do you find out the gender? Are you going to find out? Hecks yes! We are both such planners and researchers that is there is no way we couldn't know if we are expecting a boy or a girl. There is something appealing about experiencing that moment of "it's a boy/girl!" at the actual birth, and I understand why people choose that, but I just know that not being able to plan and prepare in the way that we enjoy would absolutely kill me. And we find out the gender next month.

How are you feeling? As of right now, pretty good. But it seems I am one of the unlucky few that get pretty bad morning sickness that lasts beyond the first trimester. And that right there is probably one of the main reasons why I haven't blogged very much lately. I was just such a misery to be around for the first six weeks that I really didn't feel like I had much to offer the world, even if I could have told y'all that we were expecting. However, at 16 weeks I feel like I'm feeling a little bit better all the time, and ready to reenter the world of the living.

How was it traveling with a 2 year-old while pregnant? Thankfully I had Nick, and I just could not have done it without him. The actual travel part wasn't too bad: take off and landing were a little rougher than usual for me, and I felt a bit sick on the train to Sweden, but mostly we were both too busy with Espen to really allow for any personal complaints! In all fairness to him, Espen is an excellent traveler, and just deals with whatever it is we ask of him. Things were a bit harder once we arrived in some ways, because Espen struggled with the time change, which meant that we had to be jet lagged whether we wanted to or not. I felt tired a lot in the mornings, but thankfully my mum and Nick let  me sleep in more than I have since Espen was born! Having said that, I felt tremendously relieved to arrive at home and know that I won't have to get on a plane for a very long time, and can now just hunker down and get into baby mode.

How was that? Is everyone back in the loop? If there's something else you are dying to know, please feel free to ask in the comments, and I will tell all. Well, most.