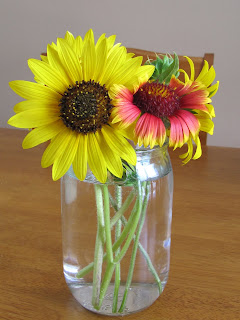 This one worked out well. Espen and I happened to pick some flowers while we were out on a walk the other morning, which we then came home and put in a jar because the flowers were too short for a vase. It wasn't until later that I realized that a jar was the next thing on my photo challenge. All i had to do was whip out a quick shot while Espen ate his lunch. Nice and easy!

I love having fresh flowers around, and this loppy little bunch is especially charming, I think. It's nice to take advantage of the rest of the summer while we can.
Posted by Tamsin North at 9:15 AM

Email ThisBlogThis!Share to TwitterShare to FacebookShare to Pinterest
Labels: 30 in 30, Photography, Pretties