I have to say that with that photography project under my belt, I feel like my blogger's block might finally be at an end! I was thrown for such a loop with everything that happened this summer, that blogging often felt like the last thing I wanted to do, and so I just got out of the habit. But now I feel like I might just be back!

I want to pick up where I left off in July, telling you about our trip to Norway (and the Netherlands and England) this spring. I just want to make sure I record some of the things we did there, so just smile and nod like looking at someone else's vacation photos is your fave, ok?

While visiting Nick's sister Tess and her boyfriend, Jasper, in the Netherlands, they took us on a trip to the city of Delft. I have to say that I really enjoyed visiting a country where everything is within driving distance! We stayed in the middle of the country, and were still only about two hours from every border, which is handy for sightseeing.

Anyway, Delft was on my list for two reasons: the artist Johannes Vermeer and Delft pottery. I hadn't really thought much about the city itself, and had my socks well and truly knocked off by it's charm and beauty. See for yourself: 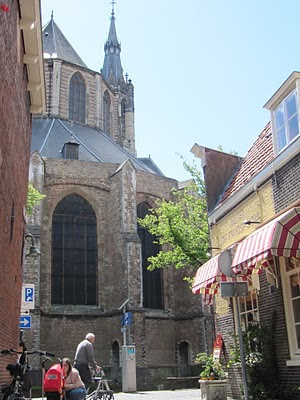 Feel free to ignore me crouching in the corner. 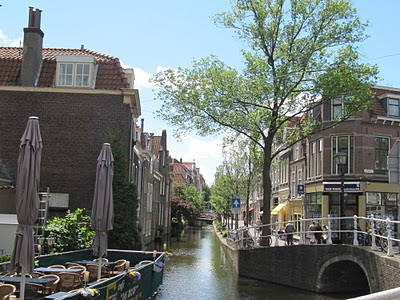 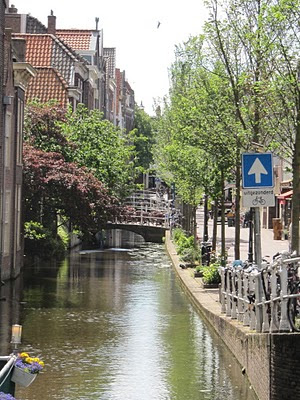 This picture just makes me smile as I remember how... cute! it all was.

Seriously. I loved it. Even to the point of checking out some real estate in a real estate agent's window. I especially love that because it is a small city, the streets and canals are very narrow, which makes you feel like there is water everywhere. And they have these tiny bridges that just make your heart sing.

Delft is an old city, with many of the buildings dating back to the 17th century. Because of an explosion in 1654 that destroyed most of the city, there aren't too many buildings older than that, although both of the biggest churches survived. 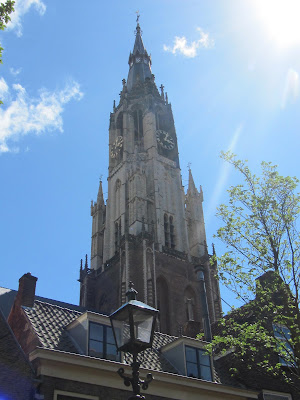 The spire of the Nieuwe Kerk

A little bit of architectural humor for you. This photo shows what is known as the Nieuwe Kerk in Delft. Nieuwe Kerk means "new church," because this little spring chicken was only completed in 1492. Which makes it a total newbie compared to the Oude Kerk (Old Church) which was founded in 1246.* It makes me smile that something built almost 600 years ago is still considered "new".

We started out our day at the Vermeer museum. We didn't realize before we went that the Vermeer museum didn't have any of Vermeer's paintings, so that was a little disappointing. Of course, if I had thought about it, I might have remembered that his works are few and very rare, and mostly owned by foreign museums. (Art History major, remember?) Vermeer is actually one of the few great artists whose full body of work you could actually realistically see in person. He didn't paint much in the first place, and so only 34 painting remain today. I think I've seen 3, so 31 to go!

The museum had done a great job with what they had, and once we understood what they were doing (i.e., not displaying original works by Vermeer), we enjoyed the exhibits. But I would say that unless you're a pretty hardcore art fan, you might not enjoy the museum all that much. Their gift shop was pretty, though, so you might enjoy that! :) If you're curious about this Vermeer dude and why I personally go all Art Nerd over him, you can see a pretty cool display of his work here. The Milk Maid rocks my world.

After the museum, we spent the rest of the day in search of some Delftware. I wanted a Christmas tree ornament for us (we often buy something for our tree when we travel), and plate for Nick's mama, who collects them. It wasn't too hard to track down some hand painted Delftware, seeing as about 60 percent of the town square was devoted to selling the stuff. It was, however, much, much harder to pick something. I didn't want the typical windmill-emblazoned tourist stuff, and so we were in and out of stores  like mad people, trying to find Just The Thing. We ended up getting a little hand-painted bell for our tree, bought from a lady who painted right there in her little store, and then a plate for Grandma from the official Royal Delft store. We also bought a little hand painted cow for Espen. I like the idea of getting him a little souvenir from his visits to places he won't remember when he gets older. 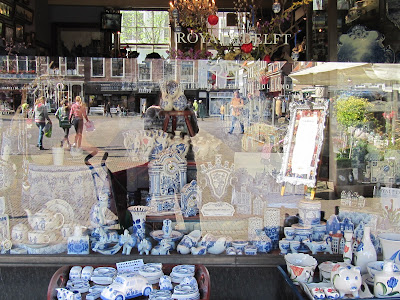 An attempt at taking a photo of the Royal Delft window. I got lots of glare, but ultimately decided I liked how you could see the square in the background, reflected in the window.

Espen was desperately tired by this point, and so sick of stores and not being allowed to touch anything. I'd happily bring a bull into a china shop rather than him at that point, so we called it a day, bought some ice creams and sat down to watch the newly married couples emerge from the church and the city hall that face each other across the square.

Another place to revisit the next time we go to see Tess.


*All of this fun info found on Wikipedia.
Posted by Tamsin North at 2:04 PM