Before we get started, I have to tell you that my son called me saucy yesterday. Saucy! I have to admit that made my whole entire week. It was just out of the blue too, which made it perfect.

The truth is that I really haven't been feeling very saucy lately. Unfocused, unmotivated, disorganized and exhausted - yes. Saucy, not so much. While what I probably really need is a sharp kick in the pants, it's nice to know that someone thinks his mom has still got it.

We'll be making a small change to our toddler activity round-ups. While Espen and I both love spending time with our friends, I've decided to not write about our play dates anymore. I'd hate for anyone to feel like we're just spending time with them to check something off on our list, or for the sole purpose of blogging about it. And even though I'm careful about not using identifiable names or photos of other people's children, I don't want to make anyone uncomfortable by writing about them. We value our friendships so much, and I just feel like it's better to be safe than sorry.

Back to our regularly scheduled programming.

Field trip I have racked my brain, and I don't think we really had one this week, unless you could a trip to the doctor's office and a quick jaunt to BYU. Which you really shouldn't. Still, with the zoo and farm country behind us and a couple of fun trips in the pipeline,  I don't really feel too bad about that. Next week!

An ambitious activity Goodness, this one could have been so disastrous! I was feeling tired and grumpy and just generally crummy last week, so of course I called my husband at work to tell him just that. I'm pretty helpful like that. He suggested that I load Espen into the stroller and walk down to the park, about a mile away. I whined and made excuses, and then ultimately decided to go. It was hot and dry and dusty, and there is no sidewalk for part of the walk, and cars turning left at the light wouldn't let me cross, and a huge part of the walk is along a busy highway, and and and....! Espen had a great time. He's at that stage where he just loves anything with wheels, so he had a great time watching all of the cars, trucks and "O-sicles" (motorcycles) that went by. In spite of his cheerfulness, I continued to whip myself into a state of misery until we got to the park, where we discovered that the playground was closed! Not just closed, but fenced in, with enormous holes in the ground. Nick had offered to pick us up on his way home from work, but he wasn't due to leave work for another half hour, and there we were with nothing to do.

So we made us some proverbial lemonade. Although it was September, and we were absolutely unprepared, I took a deep and anxiety-ridden breath and let Espen play on the splash pad. 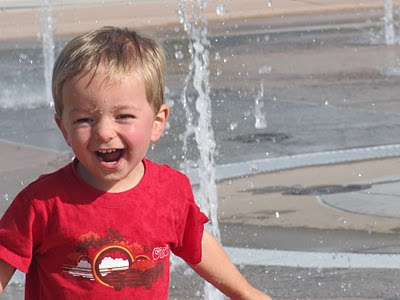 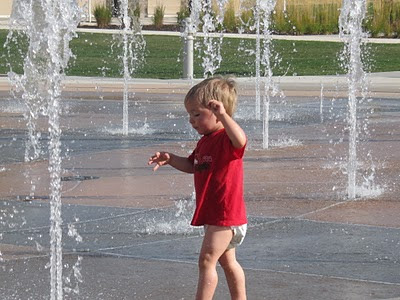 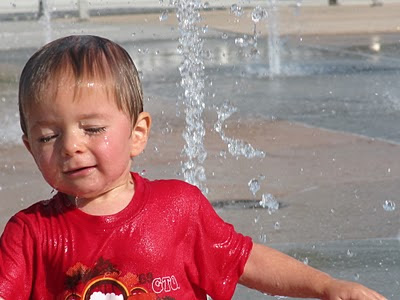 And he had a fantastic time! Yes, mine was the ghetto child playing in the water in his diaper and a t-shirt with absolutely nothing to change into, but mine was also the little boy who was having the time of his life. It seems that this is a lesson I can't learn often enough: to let go, stop worrying and just enjoy.
Posted by Tamsin North at 4:04 PM