Did you have a good weekend? We had another great one, just the three of us relaxing at home without any big plans or projects. I have about a brazillion photos to show you, but before I get to them, let me tell you about what Espen and I got up to last week: 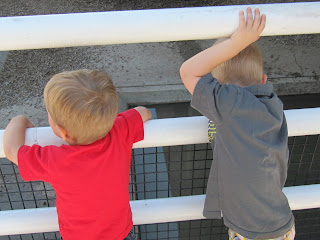 Espen and C admiring the pigs.

A field trip: We took advantage of Thanksgiving Point's Two-Buck Tuesdays (sadly, now over) and took a trip to Farm Country with some friends. The earliest we could all make it was 11 AM, which made me nervous because that is getting dangerously close to nap time. We don't mess with nap time around here. But I knew it would be fun and good for us, so I took a deep breath, loaded up the car and off we went. And, oh, it was worth it!

To say Espen enjoyed himself would be the understatement of the century. We soon ditched the stroller so he could run from enclosure to enclosure as fast as his 18 month-old legs could carry him, and bellow out the name of whatever animal was inside: "A rabbit! Chickens! A cow!" Some older kids were counting the pigs with their mother, so soon we were counting everything too: "twoooo, fweee, twoo, seben..." Espen had the time of his life, although I'm not quite sure if he enjoyed the wagon ride or the chickens the most. Yes, there was tired grumpiness when we went back to the car. Yes, he fell asleep in the car and slept for 20 minutes while we drove home and refused to nap when we got there. But every once in a while, it is worth the trade-off to let him do something he really enjoys at the expense of a nap.

A few tips if you're planning a trip to Farm Country yourself:


A play date: It looks like we are officially on the play date circuit, because Espen had a friend to play with every single day this week. We didn't necessarily plan it this way, but it worked out great, and Espen had a really good time. We probably won't stuff our social calendar like this every week, but we both enjoyed spending lots of time with friends while we had the chance.

An ambitious activity: We've honestly been too busy this week! However, I have been making a conscious effort to let Espen help me around the house a lot more lately. He now has one official chore, which is loading and unloading the dryer. He takes it very seriously and works diligently until he is finished. Then he tries his hardest to push the laundry basket filled with clean clothes to the foot of the stairs. It impresses me to see him really put his tiny back into it, even if I do help out quite a lot along the way. I think it's important for kids to learn how to work, and when he enjoys it as much as he does, why not?

Besides child labor, the other thing we have been doing a lot of lately is coloring. Espen begs daily to get the crayons out, and loves to spend hours and hours scribbling away. See my mum's cute post about that here. 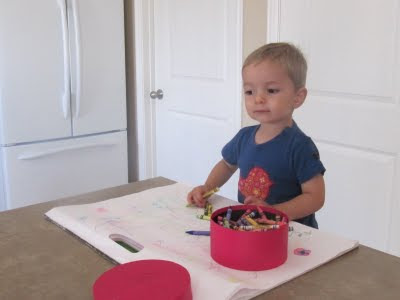 How was your week?
Posted by Tamsin North at 1:21 PM